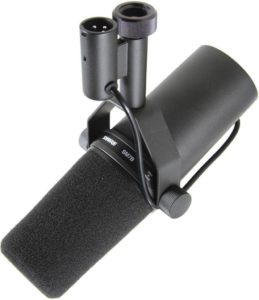 The SM7B vocal dynamic mic by Shure a model that can be used for a wide variety of applications. Many recording engineers believe that in order to get the best sound you have to use the most expensive condenser mic you can find. But this mic can easily prove that theory wrong. This model is priced affordably and is able to produce high-quality sound and impressive results. It’s also earned quite a reputation in the recording industry and is considered a go-to mic in the studio.

This mic by Shure is specifically designed for vocals. But what makes it truly special is that unlike most vocal mics, this model by Shure is a dynamic mic. One of the first thing users will notice is the way the mic’s bracket is already attached, which is definitely good news, especially for newbies with no prior setup experience.

The mic is heavy, large and very sturdy. Like many dynamic mics, this model is an end address mic, which means you’ll talk into the end of the cylinder. This design makes it a lot easier for users to view their computer screen when using the mic.

This model offers a neutral, yet rich sounding low end, making it comparable to a high-quality bass mic. With this model, you won’t experience obnoxious boominess or distortion like you typically would with a consumer grade mic. Instead, you’ll just get a deep, balanced and clean bass sound. This is one of the reasons why consumers tend to fall in love with this model. At a reasonable price, they’ll no longer have to compromise with cheaper mics that sound too thin and too boomy. And at the same time, this mic doesn’t sacrifice any quality. The mid-range features just a little coloration and is just as neutral as its high-priced counterpart. The highs are also very transparent and exceptionally smooth, despite the visible dip on the frequency diagram. For many, this mic sounds much better than any flat condenser because even the most expensive condenser tends to have a certain amount of graininess or edginess, but this model is completely smooth.

Of course, there are some downsides to this model. It’s not exactly as crispy sounding as condensers and it also doesn’t offer an extended response up to 20kHz. However, it does offer a less flat response up to 12kHz, which is more than sufficient for most vocals.

But with dynamic mics, it’s more about the quality rather than how low it’s able to go. Of course, this mic’s transient response isn’t anywhere near to a condenser, which is why it isn’t able to capture quite as much detail, however, it’s still pretty decent for a dynamic microphone.

But aside from studio recording applications, a condenser mic is usually too hot to capture everything. And this can be especially true for radio station use because, in that environment, you won’t want to capture every single sound such as background noise. Unlike a studio-grade condenser mic, this model is also much easier to use.

The mic’s internal shock mount also offers more than enough absorption, substituting for traditional bulky external shock mounts that you’ll commonly see on higher priced models. So while this mic may initially look huge, it’s actually pretty small. It also comes equipped with an integrated pop filter, which eliminates the need for an external pop filter thanks to the combination of the integrated filter and foam cover.

But of course, there will also be situations when you’ll want to remove the foam cover altogether and go for a conventional pop filter. The reason behind this is that foam tends to muffle high-frequency sound, which means the microphone won’t sound as clear and bright. This is especially important with this mic because it softens and smoothens the highs, so it tends to not sound as bright as a condenser. However, it also offers the presence boost feature, which works to compensate for the lack of brightness, providing pretty impressive results.

While the SM7B is one of the top selling dynamic models on the market today, you’ll need to be cautious about one issue. This mic requires around 60DB of clean gains. In a pro recording studio, this shouldn’t be an issue. If you’re using consumer grade preamps and mixers, then you’ll need to ensure that they have sufficient power. Otherwise, you’ll end up with a really low output. To solve this problem, you can place another preamp in the chain.

Pros: This mic offers a crystal clear natural sound with rich lows and extremely smooth highs. It also offers high and low cut booster filters and works without pop filters and external shock mount. This microphone also provides great sound isolation. The mic’s noise rejection capabilities makes it a great choice for live recording, a situation in which the average condenser microphone would get too much bleed.

Cons: Some engineers felt that this mic tends to take away from vocals instead of enhancing it. Keep in mind that you’ll need a preamp with 60DB in order to get good sound and most PC audio interfaces with mic preamps have only about 30 or 40DB. If you’ve purchased this Shure mic and it simply doesn’t offer the type of sound quality you’re looking for, take a look at the Heil PR40 dynamic studio-quality microphone, which many consumers chose over this Shure model simply as a matter of recording preference.

This mic is awesome at not picking up any background noise, allowing you to use it in an untreated room and still enjoy professional results. Its various sound settings and sleek design is also a plus. Consumers who purchased this mic claim it’s a must-have for any recording studio and even works well for live performances. Consumers gave this mic a rating of five out of five stars, which makes this Shure mic our top rated product and it’s definitely one of the best studio microphones on the market.